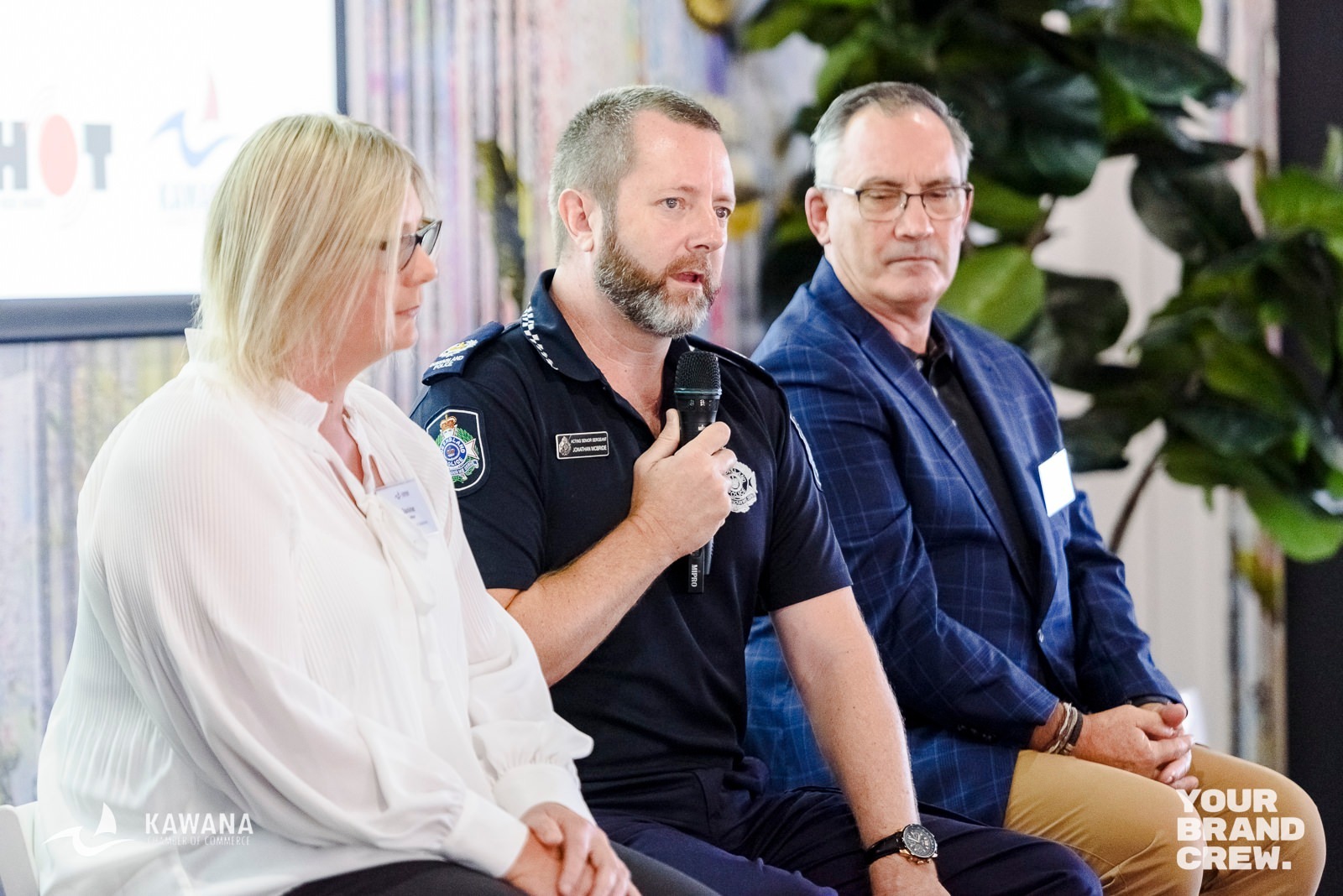 In May, I attended a breakfast event in which Lloyd Clarke took to the stage and asked us to challenge controlling behaviour when we see it. He implored us not to be bystanders. On the big screen behind Lloyd while he was speaking were photographs of his daughter and three young grandchildren playing in the shallows of the ocean, their bright smiles filling the big screen.

We’ve gotten quite good at noticing physical injuries, but most abuse begins with coercive control and sexual violence. This was true for Hannah Clarke.

Hannah had separated from her husband. He threw petrol into her car and set it on fire, murdering Hannah and their three children, Aaliyah, Laianah, and Trey.

Domestic violence homicides are horrific crimes, but they’re not rare.

May is Domestic and Family Violence prevention month in Queensland. People assembled at this breakfast event to learn how they can help friends, family, colleagues and employees who they think might be experiencing DFV.

Joining Lloyd Clarke was Jonathon McBride, Police Officer in Charge at Sunshine Coast Domestic and Family Violence & Vulnerable Persons Unit, because 40% of all police time expended relates to responding to and investigating DFV.

I appreciated that Jonathon began by clearly stating that DFV is a gendered crime.

The advice from Jonathon was when you hear it, report it. Don’t think you’re being a nuisance. Don’t think the police have ‘more important’ calls to go on. Each time the police respond to an incident of DFV they ask each person involved if they would like a referral to a support service. Frequently this referral is refused. It might be on the 20th time the police respond and offer a referral that it is accepted. So even if you’ve called many times, always report it.

I learnt that even though 40% of all police work is responding to and investigating DFV, officers don’t receive regular training sessions on it. They do a module on DFV in the academy and beyond that it is up to them to seek out information and learn it themselves. Basically, they learn it on the job.

I asked Jonathon what is the next step, currently missing, that he’d like to see put into place. He explained that within a few days of responding to an incident of DFV the police will return with a DV service social worker. He’d like co-responders, where the police go in first to secure the scene, and get police statements as per the law, and then the social worker comes in immediately after, for greater effectiveness.

Jonathon also pointed out that when we help a victim of DFV the offender tends to go on to do it to another, and another, and another woman. The perpetrator’s behaviour needs to be stopped/changed. Hence why the police and courts always offer a referral to a men’s program.

This breakfast event was hosted by DV Safe Phone and the Kawana Chamber of Commerce with support from the Queensland Government’s Investing in Queensland Women Funding Initiative.

Ashton Wood founded DV Safe Phone to get a spare mobile phone into the hands of those who need it because the phone is one of the first things the violent and controlling perpetrator smashes or uses to track and monitor her.

Jonty Bush, whose sister was killed by her boyfriend when he stabbed her 40 times, also spoke at the event.

Then Janine Fulton, from Harm Prevention Solutions talked about how employers can prepare their workplaces so that people experiencing DFV get the right support from their colleagues and employers. 45% of women who experienced DFV discussed the violence and abuse with someone at work. Are your team informed of how to respond to such a disclosure? Do they know what to do and say? Are they trained in what not to say and do?

The following evening I attended the annual Candlelight Vigil held to remember those who have been murdered by a current or previous intimate partner, in the last 12 mths.

This month the Queensland government announced it will introduce legislation to make coercive control a criminal offence, and says it will fully implement all 89 recommendations of a landmark women’s safety taskforce, led by the former court of appeal president Margaret McMurdo. It includes funding more co-responder programs, which is what Jonathon would like to see become standard practice. And it includes additional funding for perpetrator programs to change men’s behaviour.

So how do we play our part?

DFV thrives in the shadows, in silence. So we can help by bringing the topic of DFV out into the open, and making it part of ‘normal’ conversation.

There may be a woman in your life who is experiencing coercive control and sexual violence. She’s most likely not going to make a sudden announcement. You’ve got to lay the ground, create the space. Here’s a few tips to help:

How to have conversations with friends and family in general

* Family members report they want them remembered for who they were, and how they lived, not just how they were killed.

First, note your friend will rarely one day suddenly tell you a whole story. When they hear you having general conversations with a group of friends or family, it paves the way for her to begin disclosing. You having the general conversation indicates to her that you MIGHT be a safe person to confide in. You’ve demonstrated you’re not afraid to sit with the topic of DFV, that you’re somewhat informed, that you care, that you MIGHT be supportive.

So your friend might drop a hint, a small nugget of information, to see if you can be trusted with it. Do you hear it/pick up on it? Do you create a safe space for it or do you judge? Are you calm or shocked and outraged?

If you respond with anything along the line of, “oh that’s disgusting. How dare he? Wait ‘til I see him!” your friend hears that you are struggling with the emotion of it, you don’t understand, and you cannot be trusted. She will not tell you anything else.

“he comes to bed later than me and he wakes me up for sex.”

“Well I tried that. He punched me.”

“So… we’re talking about rape here… he’s not having sex with you, he’s taught you not to resist?”

Listen to her, without interrupting or judging. Hear her. Don’t make excuses for the person who has hurt her. And don’t try to coerce her to do what you think is best. Understand she might not be ready to leave yet. Or it may not be safe to leave. Trust that she knows better than you how to keep herself safe in an unsafe situation. Support her to make her own choices, at her own speed.

How to have the conversation at work with colleagues/employees

DFV is estimated to cost the production and business sector $1.9 billion annually in Australia.

Work can be one of the few sites where someone can escape violence, and seek support away from their abuser.

A possible opener is “I’ve been learning about Domestic and Family Violence, how common it is, and how important it is for us to learn how to talk about it, and what to say and do, and what not to say and do if a colleague tells us she’s experiencing DFV. Is this something you think we should learn more about?”

People mistakenly think it’s about waiting for someone to confide in you and then knowing how to respond. But it begins earlier than that. It’s about showing your team it’s a safe place to tell you. There are lots of resources available, and template policies to make it easy. See the end of the article for links to helpful resources.

Playing your part (if you can) with perpetrators

Getting back to Lloyd Clarke’s request to challenge controlling behaviour, to not be a bystander.

Often a perpetrator of DFV will drop an offensive/abusive comment into the conversation with a group of friends, in front of their partner, testing if anyone picks up on it, demonstrating to the partner he’s begun controlling, that none of her friends have a problem with it, “see, it’s not a problem, it’s just you” he might say to her later.

If you can, if you feel able, and if you believe it’s safe, offer a challenge, as calmly as you’re able. “I don’t think that’s ok” is pretty much all you need to say. You don’t have to get into an argument or prove your point or explain yourself. You just have to let it be known to the both of them that you don’t think what he said or did is ok. And that prevents him using the group’s complicity to exert control.

I hope this article has given you the motivation, and some starting points, to bring this topic out into the open with your friends and family, and in your workplace. Below are links to support services and various resources.

Do call the police.

Do normalise talking about it with friends and family.

Do call people out (if you can safely) when they speak or behave inappropriately.

Do not ask, “why doesn’t she leave?” Instead ask, “how does he make her stay?” Notice the difference.

Believe her and trust that she knows best how to keep herself safe in an unsafe situation.

Call 000 if you or someone else is in danger

1300 766 491 | https://ntv.org.au/get-help/ offers assistance, information and counselling to help men who use family violence.

For more information on the orgs mentioned in this article:

Family & Domestic Violence at the Workplace

More from Free to Shine

In May, I attended a breakfast event in which Lloyd Clarke took to the stage and asked us to challenge controlling behaviour when we see it.

How do you stay strong?

Stay in the Loop

Thank you! Your submission has been received!
Oops! Something went wrong while submitting the form.